Fascinating over an idea of storytelling, I have weaved one.......

Once upon a time, there  was a man; living away from his family to earn livelihood. He was working hard enough to be rich soon. The only problem was: his phobia for 'loneliness' and even regular visits to family; living in neighbouring town didn't worked.

On 'a good advice' of a friend, the man  started socializing with neighbourhoods but being introvert; failed miserably.

Then, he began to spend more time at office and less at home to avoid boredom of been 'lone', till one late evening..........

On the way; back to home, the man mistakenly took different route and while,  wandering across a small lane, he found many scattered pages, nearby a locked house. He felt something extraordinary about them; might be their supreme quality or 'decorated' corner sides. The man instantly crushed over them to pilled up and brought home.

That 'very' night while moving fingers gently over the pages, he received a kind warmness and decided to adhere them into 'a diary' with a name, 'Dear Diary pages'. 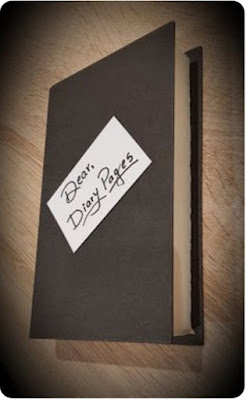 Day by day, the man started filling up the diary pages with his sweet and sour moments and felt lucky to have desirable companion who successfully faded out his loneliness.

Getting, a very warm and affectionate  treatment, unknowingly the dairy came to consciousness and began to wait for his admirer to write over her, every single thought of him.

The man, now; increasingly became so fond of the dairy and started carry her almost everywhere....at work and also during his family visits.

On, one of such visit, his family wished to accompany him soon. He accepted willingly.

After a few days, his family arrived and the man seemed to be more happier. Though, he had managed the time between work and family, it became difficult for him to spend much time with the dairy that he use to spend earlier. The dairy kept waiting for her master, every day with same admiration but left ignored at the end.

There after, 'the dairy pages' left cornered; heartbroken and alone, thus became unconscious over time.

Few months later, the man's wife sold out the 'torn' diary with old newspapers without concern of the man. While going through rocky small lane in a small cart, some of the 'uninked' dairy pages got fall nearby the same house, from where the man picked up them.

Next morning, another man located and gathered the dairy pages and welcomed to 'home'.

Again, the dairy pages waked up to bit consciousness with the very 'familiar'  touch of second man. She saw herself again as a dairy and a series of letters were inked over her.

Dairy, regaining full memory; remembered actually she was belonged to the second man only. As this man use to spend much time with dairy pages, actually decorating them to write letters to his wife for an occasion of their marriage  anniversary. But, being unaware; his wife  threw the pages from window with the envy when the man was on tour and she left to visit her relatives.

Returning from tour, the man became sad as he didn't find his pages but got busy in life with 'the hope'.

Now, he miraculously found 'his pages' back. He summoned them to 'a lively diary'......full of praise and loyalty....to gift  his wife who was coming to home after a vacation.

Moral: True friend meant to share loyality and not just loneliness.
at June 14, 2018

Inspirative silence
India
I am one of you, who is always seek to learn from whatever comes in way. I do believe everyone on this beautiful earth has choice and need to share thoughts that might relate to others and mine is to write ' a blog'