Picturesque landscape : with craggy 'rolling hills',sun-drenching 'fertile' valley along with gem-blue stream of soulful  'Rhein river' that all furnish to an attractive paradise to 'Ingelheim am Rhein', a town situated in Mainz-Bingen district of Rhineland-Palatinate, Germany. 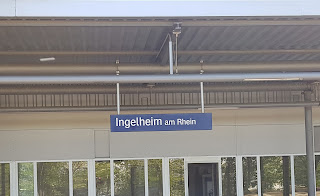 Now, it has been a month, I with my two daughters landed here, accompanied my husband, working for a well established pharmaceutical that gifted an industrial  prestige to this 'Red Wine' town which altogether known for its world famous  'International Tage' : artistic exhibition orientated cultural festival that been regularly hosted by company since 1959. For the year of 2018, it will be held in month of August to October....to attend it; I and my husband super excited !!!!!

After being witness of town verdant, I discovered a wonderful photographer in myself; who is not restricted to only those  'selfies' and captured perfect frames around the town with any angle, though 'the truth'  revealed soon that it's not my extraordinary photographic effects but 'simply beautiful' Ingelheim itself.....

A month old residency to 'Ingelheim' led me know about several other aspects of town.
The historical files are inked with name of Ingelheim; by later half era of 8th century, when the Emperor Charles, had an imperial palace erected on hill, high above the Rhein river which was one of the magnificent palace of that time and soon became a venue for imperial diets, lodging and conferences. Nowdays town has a Museum dedicated to the Imperial Palace, showcased small archaeological finds like famous gold coin 'solidus'; objects from architectural sculpture and a demonstrative model of the once imposing building, provide comprehensive information about the history of the area to the visitors of 'Majestic town' lngelheim.

Town also has a range of other historical buildings worth seeing: Burgkirche; Ober-Ingelheim Old Town Hall; Bismarck Tower and many others including parks and manuments.'Ingelheim Red Wine Festival' on the Burgkirche Fairgrounds, is held each year from the last weekend in September, is one of the popular and like many visitors I also don't want to miss it for sure.

Ingelheim's fertile valley just not only famous with Vineyards for red wine but also widely known for high yield of asparagus fields with cherries and plums making this beautiful piece of Deutschland   'an economically impressive town'.

High quality of living summoned to 'summer wine festival parade and winter Christmas tale' this scenic 'Ingelheim' equally parallelized by easy transport system of bus; railways with near by cities like Mainz, Wiesbaden, Bingen and Frankfurt Airport: the gateway to the world. Ingelheim also have fascinating super markets and shops, making living here; super cool. Thus how 'Ingelheim am Rhein' is continue to be attractive destination for visitors.

Well....along with all these quantitative information, warm greetings of known locals and those perfectly framed pictures of Ingelheim to be remain always with my memories.

For few last days as 'Ingelheim resident' I have planned something mesmorising to explore : a travel through ship across the 'dreamy' Rhein river; along the town stretches, showing my kids fluttering swans, hiking excursion paths and scenic beauty of 'picture perfect Ingelheim'. 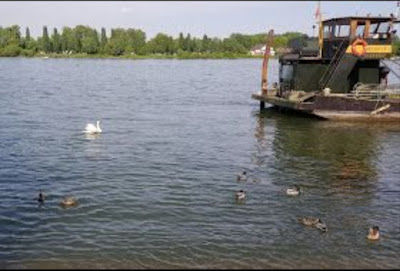 Inspirative silence
India
I am one of you, who is always seek to learn from whatever comes in way. I do believe everyone on this beautiful earth has choice and need to share thoughts that might relate to others and mine is to write ' a blog'